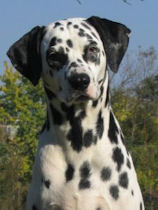 The Dalmatian is one of the most recognized dog breeds in the world because of his trademark black spotted white coat, his popularity as a fire dog, and his fame in movies. However, it hasn’t always been glitz and glamor for the Dalmatian. This dog belongs to the Non-Sporting group and was originally used in Europe during the 19th century as a carriage dog.

In order to be a carriage dog, a canine required plenty of strength and stamina, qualities that are naturally present in the Dalmatian breed. Dalmatians are an extremely energy-driven breed and often display hyperactive qualities such as jumping up and racing around the home. Hence, this breed requires the necessary exercise to prevent him from becoming destructive.

Due to the fact that this breed is a high energy dog, it’s not always a good idea to have them interact with small children. Although the Dalmatian is very fond of children and loves to play with them, he can unintentionally harm them by knocking them down. Aside from that, these dogs are extremely friendly and love people, and also make great watchdogs. They can become depressed without enough human attention and companionship. And they can also become timid if not properly socialized, and completely out of control if not provided with consistent training from puppyhood. The Dalmatian is a dog that loves to be in action and needs something to do. Don’?t expect this breed to sit around all day and be content. He will find ways to amuse himself by any means necessary.

The Dalmatian is a large dog that stands 22 to 24 inches high and weighs approximately 55 pounds. He is much too active to comfortably live in an apartment and requires the freedom of at least a small yard. They also have the highest deaf percentage of all canines. It is estimated that 12% of Dalmatian puppies are deaf. Thus, all puppies need to be tested for deafness soon after they are born. There aren’t too many other health problems that plague the breed with the exception of urinary stones and skin problems. In addition, their short coat makes them sensitive to extreme temperatures. On average, Dalmatians live up to 12 years.

The Dalmatian breed is equipped with a short, coarse coat that they do a good job keeping clean. In fact, Dalmatians are even known to avoid puddles! They also don?t have a distinct doggy odor. Their spotted coat should be brushed every two days or so to help with shedding as they shed plenty of fur year round.

In essence, the Dalmatian is a happy go lucky breed that wants to be challenged, loved, and most of all needs human companionship.

Richard Cussons cares about all dogs and Dalamtians are a favorite.