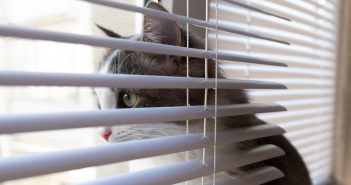 My cat has a love/hate relationship with the blinds in my house. Some background information: “Crumbs” has been with me for the last nine years; he’s a particularly large (and endearingly dopey)…

John Boydston, also known as Daddy A Go Go, sent us a link to the YouTube video of his song called, “I Think I Might Be A Dog.” He was hoping we got a kick out of it and guess what – we did. And we think you will, too.

What If Dogs Ran The Internet

Imagine, if dogs ran the internet, or at least had their own world wide web? Think about how different it would look, especially those interactive sites where we go to check in with our friends, network and generally waste time. I’d imagine those would have some differences, although the concepts would be eerily similar since, after all, dogs are territorial animals — like us — and would only allow other dogs they knew and liked access to their internet spaces. Strange dogs would only be accepted if they came with established cronies, and even then would be under close scrutiny for a while.

There would probably be at least a few not-so-subtle differences . . . 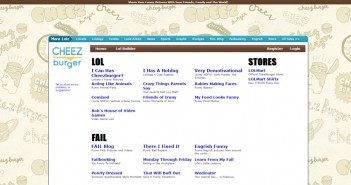 I Can Has Cheezburger = You can has laffs!

I know what you’re thinking, “that doesn’t even make sense!” No, our spellchecker isn’t broken, we’re just reviewing a pets blog whose sole focus is devoted to photos of cats brought to…

The World’s Most Tolerant Cats

If you’re a cat you have to watch out for babies and puppies!

Sometimes cats are tolerant beyond all belief. Check out these videos featuring some of the most tolerant cats in the world . . . and the babies and puppies who dare to test their tolerance.

Alternatives To The Dreaded Elizabethan Collar

“Forsooth and alack, ’tis an awkward plight . . .” muttered Will, the English Mastiff as he tried to maneuver through the doorway and into the lobby after being stitched up. The difficulty caused by the slight sway and stagger from the anesthesia that hadn’t quite worn off was exacerbated by the giant plastic cone — Elizabethan collar — that encircled his head like a . . . well, like an Elizabethan collar.

Dane sent me a link for a video that features a guy named Dan and a cat named Sheeba playing Risk (the board game). I have to admit, it’s pretty funny and pretty silly – but what got me is Sheeba’s cat cone thingy. Notice hers is signed (like a cast)! How sweet is that…

November 4th is tomorrow! It is not only the first Tuesday of November. . . it is the day that all Americans will come together to elect our nation’s new President. What you might not know is that it’s also the day the Doggie Electoral College will cast their votes to make their barks heard around the world. Even as you read, the popular

A Walk On The Wild Side!

This guest post comes to me from Caroline, too busy for her own blog but not too busy to jot down a day in the life every now and then. She’s kind enough to share an adventure every now and then and recently sent me this little snippet about friendship, and her walk on the wild side…

As mom to five cats, my girls as I call them, I

Yes, But When Will the Caged Bird Sing?

Now that I’m four, I get to go over to my friends’ houses sometimes, as long as one of the parents is home. My favorite places to go are Jackie Gosney’s house and Brian West’s house. They both live on James Street on Binghamton’s South Side, just a few doors from our green, two-family house on Vine