Time and time again, ferret owners find themselves put on the spot or questioned about their odoriferous pets. Ferrets are captivating little pets with their cute faces and comical antics. Said to be smarter than a dog and retaining an almost kitten-like playfulness even through adulthood, they are popular, save for one problem; they tend to stink.

Is there any way of combating this problem or are ferret owners doomed to always have the stinkiest pets? Sadly, every year there are many ferrets abandoned due to their smelly issues. But there is hope. In fact, by taking a few simple steps, ferret odor can be practically eliminated, leaving pet owners free to enjoy their little furry friends. 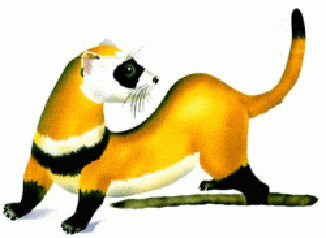 Belonging to the same zoological family as creatures like skunks, wolverine, minks and badgers, the fact that ferrets can be smelly is an entirely natural thing. Possessing musky scent glands behind their ears and around their anus, ferrets have no idea that their own particular eau de ferret is not what most humans consider the prettiest of scents. Fortunately for the pet owner, most ferrets which are sold in pet stores have been “de-scented,” removing the glands from around their anus and preventing them from spraying, though the glands behind their ears remain.

So how do we combat “stinky ferret syndrome?” There are many steps to take that will help eliminate odor.

Spay or Neuter
First of all, it will definitely help to cut down on the potency of your pet’s smell rating by ensuring that s/he has been spayed or neutered. When a ferret is fixed they are less inclined to mark their territory or to exhibit many of the traits that a breeding ferret might show. Additionally, spaying and neutering your pet will also improve their health, making them less susceptible to disease, as well as reducing the likelihood that they will exhibit territorial behaviorisms.

Diet Choices
They say that you are what you eat, and ferrets are no exception to this rule. Feeding ferrets a diet that consists of fish-based foods can contribute to your pet’s odor, as well as giving their a coat a sheen that tends to be quite oily in appearance. For best results (and least odor), feed a chicken or meat-based ferret food and avoid vitamins or treats that contain fish oil. Ferrets that are extremely obese, or that are fed a diet that is particularly fatty, can also carry a strong odor. Diet is essential to helping control pet odor.

Groom Wisely
Regular baths, about once a month, can go a long way in helping to control SFS (stinky ferret syndrome). But don’t over do it! More than once a month will strip essential oils and fur and can actually make your ferret smell worse. You’ll want to keep your little friends ears clean with products made specifically for ferrets.

Tidy Spaces
Keep the cage, litter box, toys, bedding, sleep hammocks and entire ferret area clean and tidy. Remove waste at least twice a day and give everything a good washing once a week.

There are lots of ferret supply products on the market today to help fans of the ferret keep their pets happy, healthy, and much more odor-friendly!