Back in the early eighties I had the sweetest pet that I thought was just a mutt. As it turns out, I was the proud owner of a designer dog! Marti was a mix between a purebred Cocker Spaniel and a purebred Poodle. That’s right, I had a cockapoo. Back in the day when two different purebreds started a family it was frowned upon and they were labeled mutts along with all non-purebred dogs along with any dogs with an uncertain ancestry. Now these purely purebred mixes have become the “in” thing and are often called Designer Dogs. How great is that?!

So basically, designer dogs have a purebred mom and a purebred dog who are each from different breeds. The term, designer dog, can actually be traced back to the late 20th century when breeders crossed purebred poodles with other breeds to obtain the hypoallergenic coat of the poodle with other desirable characteristics of other dog breeds.

Times have changed and I did discover that not all designer dogs are being bred 50% purebred to 50% purebred. Multi-generation crosses are very common for breeders. One of the advantages according to breeders is genetic problems are much lower than purebred dogs because the gene pool is mixed. With the designer dog you will not know what the dogs temperament will be, exactly what the dog will look like or the size of the dog. If and when you decide to get a designer dog, do your homework and find out the characteristics of both breeds.

In today’s world designer dogs are right up there with designer purses and designer shoes. To some this is an important factor. Owning a designer dog should be for the love of dogs and not to fit in with the crowd. 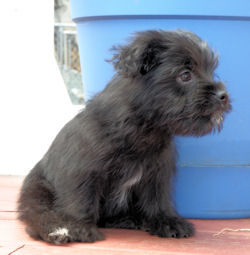 I never really gave much thought when I heard the term “designer dog” or researched the subject until my daughter became the proud owner of a four pound Yorkshire Terrier x Pomeranian mix which, in the designer dog world, is either a Porky or a Yoranian.

I found that name to be somewhat humorous and decided to look up the names of other designer dog breeds and basically spent a very entertaining afternoon looking at some of the cutest pups I’ve ever seen.

Here are just a few of the popular designer dog breeds I found. They will surely put a smile on your face and may even give you a chuckle or two.

The list goes on and on, but this gives you a good sample of the names for the ever so popular designer dogs. You can find more at designermixes.org. If you find yourself feeling down one day, just pop on over and have a laugh.