We were contacted by the nice folks over at DryPet to see if we could give their doggie towel a test run. Of course we can! We have lots of pets, everyone we know has pets. The only problem we had was deciding who would get to give the towel its test run . . .

The package arrived from Canada, packed well in a large manila envelope. Not a big deal, it’s a towel. We were really impressed by the lightness and feel of the towel, the color (a beautiful brown), and the quality detail of the embroidered paws in the corner. We also noted that the instructions say not to use fabric softener when washing, but that the towel is otherwise washer and dryer safe. It’s also hypoallergenic and anti-bacterial. Good to know. 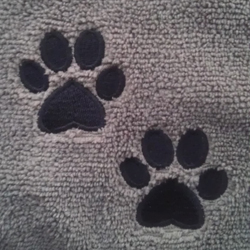 Even though we liked the towel’s look and feel, we were a tad disbelieving as we forwarded the towel to our guinea pig selected tester. The experiment went better than expected. Here’s what our lucky lady with four dogs had to say about her DryPet towel testing experience:

I have four very rambunctious indoor furry friends that spend a large part of the day playing together outdoors. We’ve made it simple, they exist the back door straight onto the deck and a fenced in portion of the back yard. Super simple. They love it. I love it. Just like children, they periodically want to come back into the house to see if anything important is going on. My typical day includes a series of letting my canine companions in an out of that back door several times a day. This routine is not a major kink in my daily life – unless it’s raining! You can imagine the fun it is if all four want to come in from a rainy day play at the same time. I keep a literal pile of old bath towels at the back door to accommodate them coming in on rainy days.

You can bet I was delighted when I was asked to give DryPet towel a try! Gee, a product that might make my life easier? Sure! I got the towel. Then I waited patiently for a rainy day. Truthfully, I really didn’t think one towel would do the job for all four dogs. But I was willing to give it a whirl.

The rainy day, along with cold temperatures, finally arrived and the towel was in for a true test. Early that morning, right on schedule, they all four flew out the back door to take care of business and soon returned. They’re all well trained, they stop right inside the door and wait to get their drying in turn. Some more patiently than others.

My four dogs aren’t large, but I had serious doubts about this brown towel’s ability to dry all four. The first one dried rather quickly, sure, but there were three more to go. After drying each one, the towel began to amaze me and by completing the deed on all four, I was a tad shocked. The towel was actually much heavier, and feeling a bit wet to the touch, but it had managed to dry all four of them. I must say I was quite surprised and pretty darned happy with the performance of the DryPet towel.

Skeptical me, however, was sure the towel wouldn’t be dry enough to do it again after the next playtime bout outside. I put the towel over the back of a chair by the door anyway and went about my business. I don’t typically place the bath towels over the back of the chair for 2 reasons: (1) there are four of them and (2) they don’t dry out fast enough anyway. I simply toss them into the laundry load and get fresh dry towels for each dry-off fest.

Fast forward a bit, two dogs went out, fast forward a bit more, one dog came in and the other two went out. It was later in the day and a bit warmer, but still raining. The little brown towel managed to dry the incoming dog yet again. Two minutes later, he was back outside. Fickle furball that he is.

When they all decided it was time for an indoor nap, the 2nd true test drive began. Much to my chagrin the towel did dry hanging over the back of the chair. And it did just as good a job drying all four dogs as it did the first time around. What?!

I generally use a basic cotton towel per dog – I used a single DryPet towel for four dogs. DryPet touts that their towel is able to hold five times the amount of water that a basic cotton towel is able to hold. Sounds like I could get another dog and still be good to go with my new dog-drying towel. It certainly absorbed ultra-fast and cut my dog-drying time down a bit, too. Not to mention the laundry load that accumulates on rainy days. I really love this product and from my experience the DryPet towel does exactly what they claim. Without a doubt, I give them a thumbs up! I would say DryPet is a definite fix for rainy day blues.

LaToya Sukhoo, the founder of Toronto-based DryPet, came up with the idea after visiting a girlfriend who had a Labrador Retriever named Jack. She arrived for a backyard lunch a little too early one afternoon to find her friend in the process of drying off her dog. Let’s just say that she was struggling to get him dried off. Several months earlier LaToya had discovered the microfiber fabric and while watching her friend struggle to get the dog dry, she put two and two together for a product. She got a sample of the microfiber fabric and gave it to her friend to use. It was an instant hit, and her idea became a reality.

One of the reviewers stated “They even personalize your pet’s name on the towel which is great!!!”. I was unable to find that option on the site but the site also links to stores that sell the Drypet towel, so perhaps the option is available when purchased in a store. The towels do have the cute little paws on them, leaving no doubt what they are to be used for.