February is Spay & Neuter Awareness Month. Have your dogs and cats been spayed and neutered? Bob Barker was right, to help control the pet population it’s important to have your pet spayed or neutered. There’s no better way to ensure Fido and Felix aren’t out carousing and littering the town with, well, litters.

If you’ve already taken care of getting your dog or cat spayed or neutered – kudos. If not, what are you waiting for? What’s keeping you from getting it done?

Turns out, there are a lot of misconceptions about spaying and neutering that probably scare people away from getting this important procedure done for their pets. As a responsible pet owner it’s important that you do your best to understand the procedures and clear your mind of the misconceptions that have been floating around for years.

Millions of healthy, adoptable cats and dogs are euthanized each year in the U.S. because there simply are not enough homes for them all. Last year, over 15 millions dogs and cats were killed in the US – and that doesn’t include the many pets who were thrown out of cars, left by the side of the road, or dropped off in woods or fields left to fend for themselves. Yet, we can’t kill the misconceptions that are perpetuating their destruction. For every puppy and kitten brought into the world by a well-meaning owner, another will die somewhere else, unwanted and homeless.

Having a cat or dog who isn’t spayed or neutered doesn’t seem like a big deal, right? Let’s consider Miss Smith who owns a male cat named Tom. Tom’s a great cat, a perfect pet, and Miss Smith provides awesome care for his well-being – but doesn’t get him neutered because she doesn’t want to put him through that. Tom occasionally hooks up with stray cats in heat. Let’s be conservative and say that Tom is responsible for helping 2 litters of kittens enter the world every year and that the litters average 2 surviving kittens (even though we know there are likely more per litter). In five years, Tom’s got 20 kittens floating around that Miss Smith isn’t even aware of.

But the real problem is, those kittens grow up and start having their own litters: 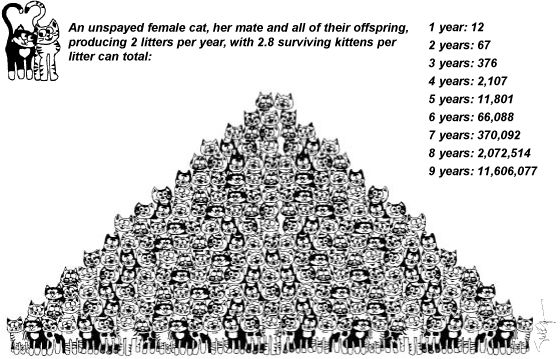 Quite an eye-opener. We’re not sure who originally created the image, but it’s a perfect representation of the pet overpopulation problem. Female cats can breed three times a year and have an average of four kittens per litter. Dogs can breed twice a year and have an average of 6 – 10 puppies per litter. Female cats can breed as early as four months and dogs as early as six months! Imagine the pyramids to put overpopulation into perspective. The sad fact is, many of the new litters end up being euthanized. 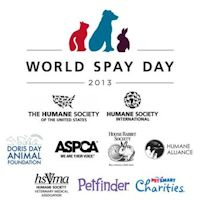 The Humane Society of the United States and Humane Society International will hold the 19th annual World Spay Day on February 26, 2013. During the month, events will be held to raise money to provide low and no cost spaying/neutering, educational programs, and clinics.

Hundreds of animal welfare organizations, veterinary clinics and hospitals, schools, businesses, and individuals in the United States and around the world organize World Spay Day events to educate people in their communities about the life-saving importance of spay/neuter, to provide spay/neuter services at special prices for particular populations, and to raise critical spay/neuter funds.

Fix at Four is a spay and neuter education initiative from BestFriends aimed at creating awareness of the proper age at which dogs and cats should be spayed or neutered, recommending four months is old enough. There’s still controversy over pediatric neutering. Below are a couple of sources that might be able to help you decide:

So what are you waiting for?

This is PetsBlogs, reminding you to help control the pet population.
Have your pet Bob Barker’d. 🙂

IF you grew up watching the Price is Right, check out this video – very interesting!