On the eve of the Westminster Kennel Club dog show owners shuffle through the check-in line in the lobby of Hotel Pennsylvania, the competition’s official lodgings. This is the world’s elite canine mixer, where you can see dog lovers with every shape, size and color imaginable. Why are dogs so different?

The February cover story of National Geographic magazine features a fascinating article titled “How to Build a Dog” written by Evan Ratliff. The article goes into detail how scientists have found the secret recipe behind the spectacular variety of dog shapes and sizes, and it could help unravel the complexity of human genetic disease.

For reasons both practical and whimsical, man’s best friend has been artificially evolved into the most diverse animal on the planet—a staggering achievement, given that most of the 350 to 400 dog breeds in existence have been around for only a couple hundred years. The breeders fast-forwarded the normal pace of evolution by combining traits from disparate dogs and accentuating them by breeding those offspring with the largest hints of the desired attributes. To create a dog well suited for cornering badgers, for instance, it is thought that German hunters in the 18th and 19th centuries brought together some combination of hounds—the basset, a native of France, being the likely suspect—and terriers, producing a new variation on the theme of dog with stubby legs and a rounded body that enabled it to chase its prey into the mouth of a burrow: hence the dachshund, or “badger dog” in German. (A rival, flimsier history of the breed has it dating back, in some form, to ancient Egypt.) Pliable skin served as a defense mechanism, allowing the dog to endure sharp-toothed bites without significant damage. A long and sturdy tail helped hunters to retrieve it from an animal’s lair, badger in its mouth.
Evan Ratliff, National Geographic

So why are dogs so different? The answer, the researchers say, lies in their unusual evolutionary history. 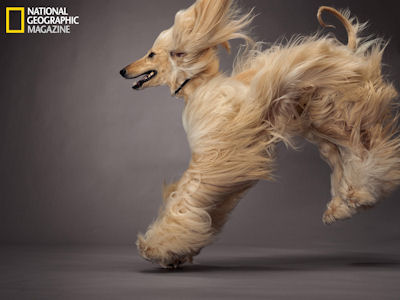 The photos are from “the February 2012 issue of National Geographic magazine.”