A day of fun was planned for all — swimming, volleyball with plenty of food, music and laughter. That was until Buttons, a wiggly-butted, pinto-spotted Pitbull, decided to help himself to a fried chicken leg. He gasped and pawed as the tasty delight slid down and lodged in his throat. Hearing the raspy sound Buttons was making, and noticing her boy’s neck stretched outward as if to get a breath, Dog Mom Natalia, high-tailed it over to him with the greatest of urgency . . .

When an object gets lodged in front of the trachea (aka windpipe) instead of passing down the esophagus, it can prevent air from getting to your dog’s lungs and can cause him to go unconscious. Our canine pals love to play catch, run with balls and sticks, and chew on toys, rawhides, bones and other items that can easily slide down the throat blocking the airway. It is therefore vital that all pet parents know how to help a choking dog since most canines are likely to experience this distress at some point in their lives.

As a precaution, get down on all fours and look at your house and yard from your pet’s perspective. Anything in reach and smaller than your dog’s mouth is fair game, including paper clips, thumbtacks, rubber bands, buttons and staples; cords of all types (electrical, drapery & blinds) can strangle while enticing smells can lure your dog to items he shouldn’t consume (bones, sticks, corncobs).

Make sure dog toys are size-appropriate, or you may need to help a dog choking. A too-small ball can slide down your dog’s throat causing him grave distress. A destructive dog may chew a stuffed toy swallowing the filling and the squeaker, both of which can block his airway! Hair ties, dental floss and articles of clothing can also become obstructions and result in your dog choking if swallowed.

What to do if a Dog is Choking

Initially, give your dog a few moments to cough. Most pooches in trouble lower their heads to get a gravity assist and try to propel the object out of their throat. If your dog is unable to alleviate the obstruction, carefully take a look inside his mouth. Never reach in without looking as you could push the object farther back, tear tissue by pulling the object, or get bitten. 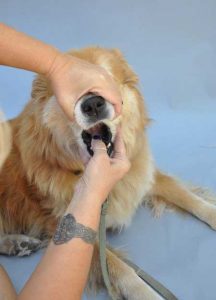 Bringing your hand over your dog’s snout or muzzle, cover his canine teeth by using your thumb and index finger to wrap his flews (lips) over the canines. Then use the thumb of the other hand to hold down his tongue, first gently pulling it forward just a bit (helping move any obstruction forward), and then lowering your dog’s jaw to take a look inside. Should you see the object and be able to safely remove it, YAY! But still do an inspection of the mouth to make sure the object did not puncture or cut which could require a veterinary visit.

If, however, you are unable to retrieve the obstruction, attempt the doggie Heimlich-like maneuver. When Dr. Henry Heimlich first wrote an informal article in Emergency Medicine in June 1974 describing the technique, he may not have had our canine pals in mind, but…with a few modifications, it can bring grrreat results! 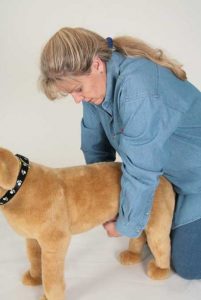 First off, do not pick up a dog that is choking, holding him in front of you like in the human technique! This will actually enable the object to slide farther down his throat! Your goal is to push up on the choking dog’s diaphragm, creating a force to propel the object out of the throat.

Stand behind your dog, or kneel, depending on his height, and place your arms around his waist keeping his head down. Think “bear hug” as you position your fist in the soft part of his stomach just behind the last rib. You should be able to feel a triangular area on his abdomen that is the rib cage. Place the fist of your dominant hand in the center soft part of this triangle, and then cover with your opposite hand.

Be sure to make contact with your own chest against your dog’s back. They key is to pull up against your own body with 5 thrusts keeping your choking dog ‘four-on-the-floor’ with head downwards if possible.

This Heimlich-like maneuver may also be used on small dogs who are choking by replacing your fist with the flats of two fingers in this same location. Instead of a bear hug, brace the small dog’s back with your other hand, and pull up towards that hand. 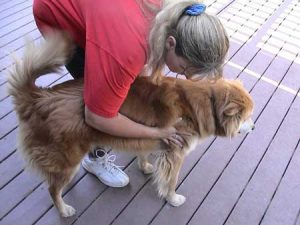 If after a few attempts, the dog Heimlich maneuver isn’t helping, an alternative method is to squeeze the air out of your choking dog’s lungs, creating a force to propel the object outward. To accomplish this, you must squeeze your dog’s rib cage in order to compress the lungs. Dogs have more flexible ribs that humans, but of course breaking a rib is a possibility. However, if you don’t alleviate the obstruction, your dog could go unconscious. Place your hands or several fingers (for smaller canines) on each side of the animal’s chest and thrust inward, pushing with your elbows in the direction you want the object to go – out the mouth. After 5 thrusts, give the animal a moment to cough and/or look in his mouth to see if the object is now reachable. If not, repeat.

With either of these techniques, the piece of kibble may not go sailing across the kitchen floor, so you may need to once again carefully look into your dog’s mouth and retrieve the object. By knowing what to do when your dog is choking, hopefully you will deliver these thrusts properly causing the obstruction to move forward enough so that it can be removed.

Not a favorite, as no one should ever ‘hit’ a pet but desperate times call for desperate measures to save a life when a dog is choking. Place your small dog on his stomach in your lap and lower his head in front of your knees. With the palm of your hand, deliver a firm blow between the shoulder blades to expel the object. Take great care with this technique as spinal injuries could occur. Never use this method on Dachshunds, Basset Hounds or any other dog that is prone to disc injury.

For a larger conscious animal, you can, as a last resort, deliver a blow between the shoulder blades, but first pick up his hind legs in a wheel-barrel method to aid in his coughing out the object. Do not try this if the animal is extremely resistant or showing visible signs of aggression. Know that it is not safe or smart to muzzle a choking animal.

Having a dog of any size is like having a furry toddler. They are dependent on us for their entire lifetime. Pet parents must preserve a safe environment, choose toys and food wisely, and constantly supervise to keep their four-legged family members out of harm’s way. Life does happen however, and you can’t keep your dog in a plastic bubble, so learn how to help a choking dog even before he needs you!

Fortunately for her dog, Natalia had attended a Pet First Aid Class and had recently practiced the doggie Heimlich-like maneuver. Once Buttons coughed up the chicken leg thanks to her well-executed technique, he remained cute as a button, and Natalia made sure dangers were kept out of paws reach!

For 20 years Denise Fleck's Sunny-dog Ink motto has been "Helping people to help their pets,"” and she has . . . personally having taught more than 20,000 pet lovers animal life-saving skills and millions more on "The Doctors," CNN, "Kirstie Alley's Big Life," Animal Planet and other TV shows. Denise is a frequent conference speaker, developed a line of pet first aid kits, written a dozen books and now offers classes online. Learn more at www.PetSafetyCrusader.com