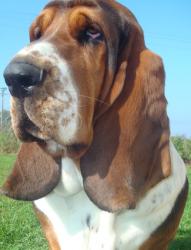 Though the exact time of their appearance has not been pinpointed, Bassett Hounds are believe to have originated during the 1600’s when they were depicted in a 1561 hunting illustration in France. At the time, they were described as a short legged breed of dog used primarily for the purposes of tracking or hunting down badgers. They are believed to be a cross of three different breeds; the Basset Artisien Normand, the Regular Artisien Normand, and the Bloodhound.

It is also common knowledge that there were similar dwarf breeds of the Bassett during ancient times. However, there is still much speculation as to why the Bassett was bred in the first place. Bassett is a derivative of the French word bas which translates as dwarf and there is knowledge of the dog being used for hunting around the time of the French Revolution as well. It has also been speculated that this was the period in history when the Bassett grew more into the role of a companionship breed.

The Bassett’s dwarf like body made it the ideal hunting dog of the day, being highly respected for its amazing scent tracking abilities and its keen intelligence. At the same time, the hound moved slowly enough while tracking, enabling the hunters to keep up with them. Despite the fact that they come in a variety of color combinations, the typical Bassett Hound is a spotted mixture of browns and whites.

Considered to be one of the more calm and relaxed breeds of dogs today, they are extremely good natured and integrate well into the home. They get along well with humans as well as other breeds of dogs and are excellent pets for homes with small children. Even when they are around different breeds of dogs, they get along well with them and they are considered to be one of the more affectionate, friendlier canine breeds. Additionally, they are revered as excellent watchdogs and their capabilities in that arena should never be second guessed.

Putting it in the simplest of terms, the Bassett Hound requires a daily portion of exercise, but only a small portion. Typically, one to two walks daily should suffice for exercise purposes and whenever the opportunity presents itself, some playtime with you and/or your children is recommended as well. Allow your Bassett Hound to sleep indoors in the evenings and spend plenty of time outdoors during the day. Grooming Bassett Hounds is fairly low impact as they require a mild brushing and maybe a couple of baths per week. Also, the breed has the tendency to drool frequently.

The typical Bassett Hound lives between 9 to 12 years but some have lived longer. This just depends on how well they are cared for. Their biggest health concerns are CHD, Ectropion, elbow dysplasia, gastric torsion, OCD, otitis externa, thrombopathy, and VWD. Secondary health concerns include luxation of the patella, and obesity is common when the dog is overfed, so monitor their intake at all times.

Jeff Nenadic from My-DogShop.com has a huge selection of over 300 dog grooming tools and dog grooming supplies.