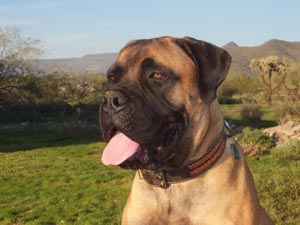 Considered to be one of the most powerful canine breeds, the Bullmastiff was the result of cross breeding English Mastiffs with Old English Bulldogs, and was originally bred to thwart the efforts of various poachers and immobilize them. However, today they are viewed as viable family pets. Additionally, the misconception is that Bullmastiffs are Britain’s oldest breed of canine when in reality it is the Mastiff that is older. For all practical purposes, the Bullmastiff is a relatively recent breed of dog.

The first documented evidence of the Bullmastiff appeared towards the end of the 19th century and they were employed to protect estates and properties from poachers who were creating significant problems for gamekeepers of the day. They were used as guard dogs to protect game, and exacted a brave and strong demeanor unlike no other breed of dog up to that point in time.

Bulldogs and Mastiffs were typically used prior to the onset of the Bullmastiff with the key negatives being that Bulldogs were too small and Mastiffs were too slow to handle the job. It was for these reasons size and speed, that the two varieties were crossbred to produce the Bullmastiff. As a result, gamekeepers were awarded with the perfect guardian for their game and property as well.

Eventually, breeders desirous of a pure strain began breeding Mastiffs and the result is that the breed is now roughly 60% to 70% Mastiff with the remaining genetics being Bulldog. In the 1920’s, the English Kennel Club deemed them as an official breed and the AKC followed suit in 1933.

If you are searching for a breed that is calm, laid back, and quiet, then the Bullmastiff is most likely the best breed for you. But make no mistake about it, when the Bullmastiff targets an aggressor, they are extremely brave and threatening. Obesity can be a common malady with this breed as they have the tendency to be lazy and overeat. So it is imperative that you keep this in mind, taking care to exercise them regularly and feed them proper amounts of food.

Despite the fact that the Bullmastiff integrates well with children in the home, it is advisable that you do not bring an adult into the home as a first time pet. They have been known to become hostile towards strange dogs and pets so keep this in mind when deciding about this breed for a pet.

Bullmastiffs are large dogs and exercise is necessary in order to keep them fit. As was mentioned prior, a lack of exercise and overeating will result in the animal becoming obese, so you need to be strict about these issues. A long walk on a leash performed on a daily basis should handle the exercise scenario. Also, be aware of the fact that they do not do well in warm weather conditions. Being indoors is the norm for the Bullmastiff, so be sure to provide them with a big bed to stretch out on once in a while. Additionally, they do drool a lot and can snore alongside the loudest of humans.

The average lifespan of the breed is 10 years and there is a tendency towards elbow, eye, and hip issues. The common major health concerns are CHD, elbow dysplasia, and gastric torsion, while the minor health issues are hemangiosarcoma, hypothyroidism, lymph sarcoma, mast cell tumors, osteosarcoma, and SAS.

Written by Jeff Nenadic from http://My-DogShop.com – the place to find free shipping on dog toys in over 100 different models.