If you are a dog owner, you don’t need to be convinced that your relationship with your canine companion is beneficial to you both. After more than 14,000 years of human beings keeping dogs as pets, there is no question that owning a dog must have benefits for both parties. Today, almost 40% of Australians and 37% of Americans enjoy these benefits of being a dog owner. Scientific research has provided evidence that pet ownership is associated with aspects of a healthy lifestyle, from additional physical activity to weight loss to companionship and social support.

People and Pets Exercising Together – The Study 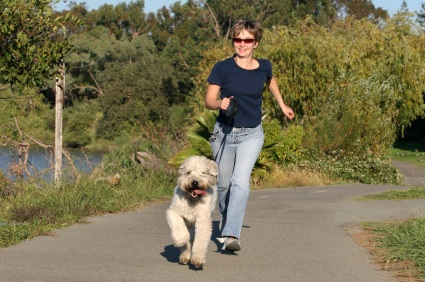 The 12-month People and Pets Exercising Together (PPET) study, conducted by Northwestern Memorial Hospital and Hill’s Pet Nutrition, maker of Science Diet and Prescription Diet pet foods, was the first to look at a combined weight management program for people and pets. Previous studies have shown that social support is an effective tool in losing and maintaining weight, and the study authors designed a weight management program to examine whether a loyal pet can provide equally effective support for losing and maintaining weight. The study addressed issues that are key to both pet and owner weight loss: healthy dietary changes and an increase in physical activity.

Healthy dietary changes were addressed by feeding the canine participants a food that was nutritionally balanced and low in fat, and designed to help the dogs lose weight while remaining satisfied (Hill’s Prescription Diet Canine r/d). Dogs who had achieved their healthy goal weight were switched to another healthy food designed for weight maintenance (Hill’s Prescription Diet w/d). The human participants were provided with meal plans and instruction on behavioral lifestyle strategies to help them control their calorie intake.

The group composed of both dogs and their owners were more likely to stick with the weight loss program than the other groups. 80 percent of the dogs in Group 1 (dog/owner group) completed the study, compared to 68 percent of the dogs in Group 2 (dog-only group). Dog and owner teams were also likely to engage in exercise together: two-thirds of owner-reported physical activity was took place with their dog.

Advantages of a Combined Dogs And People Weight Loss Program

Pet ownership has long been known to have an association with positive health benefits and feelings of well-being among humans, an association confirmed by a number of scientific studies. Evidence suggests that owning a pet can be beneficial both in terms of physical and mental health, and can have a positive impact on a person’s emotional state. Pet owners seem to have lower levels of mental stress, depression and feelings of loneliness, as well as higher levels of self-esteem. They also experience improved physical health, including a reduction in their risk of cardiovascular disease, specifically lower systolic blood pressure and lower cholesterol, as well as higher survival rates after suffering a heart attack. [2]

Several studies have shown that walking with a dog provides dog owners with an important source of social support. Women in one study were found to be 31% less likely to walk for exercise or recreation if they had no pet or companion to walk with. Another study found that dog owners had increased feelings of safety when walking with their pet. [3]

The importance of the human-animal bond is explained by the biophilia hypothesis, which suggests the bond between humans and other living things is instinctual. Biophilia comes from the Greek words meaning life and love, and literally means “love of life or living systems.” This innate desire that humans have to connect to the natural world is exemplified in the relationship between pet and pet owner. Activities such as taking a dog for a walk or to frolic in a natural space like a park are opportunities for pet owners to connect with both their dog and other living aspects of nature.

This important human-animal bond is strengthened through the sharing of quality time between dog and owner, especially when both are united against a common problem. This was emphasized by comments from dog owners in the PPET study, who indicated that spending time together was a significant benefit of working together to lose weight and exercise. Dog owners who participated with their pets showed more confidence and motivation, and many reported that helping their pet lose weight and be healthy was a major motivational factor.[4]

Health Benefits For Children And The Elderly 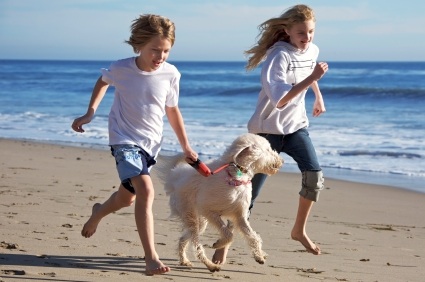 In addition to health benefits seen by dog owners in general, studies have shown that dog ownership and dog walking have health benefits for two specific groups: children and the elderly. Results have shown that owning a dog increased levels of activity or decreased weight for both groups of people. Dogs appear to provide them important companionship, motivation, and social support when it comes to maintaining physical activity and a healthy lifestyle.

A study conducted by a team from Deakin University in California looked at the relationship between dog ownership or dog walking and weight in children and their parents. The study found that young children who owned a dog were less likely to be overweight and obese, leading to the conclusion that “Dog ownership may offer some protection from overweight among young children.” [4]

The walking behavior of elderly people, defined as 71-82 years of age, was examined in a study by John Hopkins Medical Institutions. This study, which examined a period of three years, found that elderly people who did not own dogs were only half as likely as dog walkers to maintain the level of walking recommended for optimum health [5]. This suggests that owning a dog may provide significant benefits for elderly people who are trying to maintain a healthy level of physical activity. Dogs help provide them with an additional reason to get up and go.

Science has confirmed that the bond that exists between pet owners and their dogs is important for a variety of reasons, and even is associated with physical, mental, and emotional health benefits. A dog provides its owner with companionship, social support, and increased motivation to make healthy lifestyle choices such as increased physical activity. These benefits are seen in children, the elderly, and those in between. Dog owners already are aware of the importance of their bond with their pet, but they can now feel confident that their feeling is supported by scientific evidence – owning a dog really is associated with a healthier life.

Matthew Ntinou is a biologist and owner of a beautiful German Shepherd named Hera. Matthew’s research interests include the role of the human-animal relationship, specifically as it relates to maintaining a health weight and lifestyle for both pet and owner. In his website, devoted to best weight loss program reviews, Matthew offers a Medifast coupon and promotion code for Nutrisystem, two doctor-designed and approved weight loss programs.