Named one of the Top 10 Islands in the World by Conde Nast Traveler, and a Top 10 Car-Free U.S. Destination by Sherman’s Travels, Mackinac Island is known for it’s countless unique attractions and peaceful scenery. If ever you’ve enjoyed a trip to Michigan’s Mackinac Island, you might have rented a bike to cycle around the island or taken a carriage ride to view the sights. In fact, automobiles aren’t permitted, enhancing the vacation feel and appeal to the unique island and all it has to offer.

As one of our own favorite vacation destinations, it’s disheartening to hear of the utter chaos that has been occurring on the island over the past few months. With summer right around the corner and the onset of vacations it appears millions of dollars in revenue will be lost due to the recent over-population of monkeys. 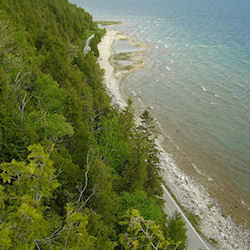 The Michigan State Police are speculating that a disgruntled visitor has retaliated by loading his yacht with monkeys and dropping them off between mile 3 and mile 4 of M-185. This area is the northernmost tip and considered the most isolated section of Mackinac Island. They’ve been unable to give the media even an approximate number of transported monkeys, but if the rumors are to be believed, there are hundreds of monkeys roaming the island. Authorities are convinced that the culprit has several accomplices and state investigators have been able to trace the inappropriate activity as stemming from nearby Drummond Island.

A little over two weeks ago, workers began returning the horses to the island in preparation for the new tourist season. When a couple of horses were injured after spending a night out to pasture, an investigation ensued. Much to the surprise of everyone, more unexplained injuries began showing up and investigators were, at first, stumped as to the cause. But it was soon determined that something, or someone, had been spooking the horses. After a stable hand spotted two monkeys leaping through the window of a horse stall, authorities were dumbfounded and convinced they’d found the cause of the chaos. Veterinarians have been brought in from the mainland to assist local workers in treating the horses who have been spooked by the happy-go-lucky monkeys. 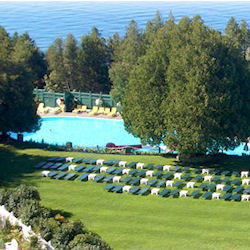 Beyond jolting the horses and wreaking havoc in the stable barns, evidently the monkeys enjoy swimming in the moonlight. “The beautiful heated 500,000-gallon, 220-foot long serpentine-shaped Esther Williams pool has been a nightmare for the staff to keep clean. Though no one’s seen the monkeys swimming in the pool, we’re spending hours upon hours trying to get excessive amounts of black hair out of the water and filtering system,” stated Sam VanDenBerg, employee of the Grand Hotel. The Grand Hotel has been family-owned for three generations and boasts the world’s largest front porch. It’s visible as you approach the island from the Straits of Mackinac.

We’re certain that this National Historic Landmark is worried about the upcoming 2012 Grand Season now that the island has been overpopulated with monkeys. In the past they’ve worried about the amount of dropped poop the hawks and eagles left as they passed through the island on the migration route, but this year they have an additional headache (or two).

The wonderful manicured grounds are beginning to bloom and blossom. Landscape workers are also battling the added treasures in the flower beds. A lot of work will need to be completed before the guests begin arriving for their perfect getaway. The aroma of Mackinac Island Fudge will have to compete with other odors for the time being. The “fudgies” will not be a happy group if clean up is not finished — and finished quickly. 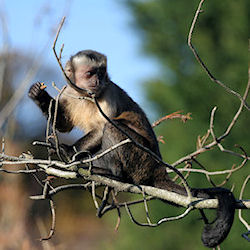 Everyone is working hard together to get the island cleaned up and the monkeys taken care of before Mackinac Island’s 125th Anniversary Celebration which will be celebrated on July 13, 2012. Such a terrible thing to happen to a one of the most family-friendly vacation spots that offers such a tranquil peace.

Show the islanders you care and are cheering on the clean-up efforts by ‘liking’ Mackinac Island on Facebook and following them on Twitter.

And if you’re not afraid of monkeys, consider booking a room at the Grand Hotel for a week or two this summer. Visit Fort Mackinac and the Old Mackinac Lighthouse, go horseback riding, rent a bike and cycle the perimeter of the island, play some tennis, take a carriage tour, stroll through downtown, check out the butterfly houses, visit the Richard and Jane Manoogian Mackinac Art Museum, or just relax by the pool.

And actually, you won’t have to worry about any monkey business in your serene surroundings! We just really like to have some fun on April Fool’s Day. Last year we ranted about the notification of a fake Nationwide Pet Tax and this year we decided to talk about one of the most interesting vacation destinations we’ve ever experienced.

There are no monkeys on Mackinac Island (that we know of) and, in fact, the island is accessible only by ferry boat or airplane. It is true that automobiles have been outlawed on the island since the 1930’s and that horses are being brought over in the anticipation of the start of the new season, but there aren’t bands of monkeys spooking horses or scooting around stables.

The Grand Hotel website has a lot of super cool facts about the hotel and the island itself. While more than one million people visit Mackinac Island each year, the island has only 600 year-round residents. Mackinac Island also has the best fudge ever. We love the island!

The Beauty of Mackinac Island, Michigan 2008