Mini-pigs you ask! We read so much about dogs and cats as pets and their cute ways but have you ever considered a mini-pig as a pet? Our preconceived notions about pigs usually sways us from considering one as a pet altogether until recently when it has become the ‘in’ thing.

Matt and Emma are a couple that knew each other since primary school. Not until they were in their twenties did they date. Their growing up years were totally different. Emma was a latchkey child and Matt was seldom left alone. By the time they got married Matt was well aware of the fact that Emma wanted to surpass the average of children per household.

After three girls Matt thought that was enough but Emma disagreed and they added just one more, a son. To Emma’s chagrin the decision to cease having more children was made. To fill Emma’s desire for a large family, animals were the only solution to accomplish that.

After leaving London where the only pets were a couple of goldfish, the family moved to rural country and began to increase the brood. One of the additions was a rowdy Canadian shepherd that was in need of training. Then came the cat, chickens and rabbits. There was still room according to Emma so two mini-pigs were added to the family.

Matt is a full time writer who has the opportunity to stay at home while Emma has a part time job that turns into a full time commitment. Matt becomes the main caregiver of the family’s pet menagerie. He is even required to register as a farmer since they own swine.

The story is told from Matts perspective and will amuse you with the humorous chaos. The character’s from the neighbor who doesn’t appreciate the lack of quiet and calm to Tom who helps Matt with ‘pig’ advise you will be entertained. 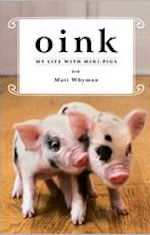 Oink My Life With Mini-Pigs is lighthearted reading and laugh-out-loud funny. If you love animals and want to learn something about mini-pigs or potbelly pigs this is the book to read. The story does not drag on and is so down to earth, truthful and tells of slightly embarrassing moments that will surely make you chuckle. Perhaps if Matt would have gone through with his plan to try his hand at pig-breeding there would have been a sequel.