I’ll never forget the moment I first laid my eyes on a pitbull puppy. My brother had called my parents the night before, pleading with them to adopt this helpless puppy he had come across who was in danger of being euthanized. At the time, our family wasn’t seeking adoption of another dog, as we already cherished our beloved mutt, Snickers. Yet being the saps we all are, my parents agreed to meet my brother and the puppy the following day.

He had a small frame with large, tadpole eyes and even bigger paws, a beautiful brindle pattern sloping his sleek body. Though a puppy, he was fairly calm and could melt anyone’s heart with his sullen, droopy stare. After we had all taken turns doting on him (whom my brother hastily named Bubbies), a confession was made: Bubbies was a pitbull mixed with boxer.

Aghast, my parents hesitated. I admit that I did, too; after all, I had only heard mention of pitbulls in newspapers and on the nightly news. They were vicious, blood-thirsty and aggressive animals, right?

Wrong. I couldn’t resist the love in Bubbies’ eyes and how he soaked up affection with ease, and neither could my parents. My brother knew this would happen all along, which is why he coyly and strategically interjected the topic of Bubbies’ breed into the conversation well after we had all fallen head over heels for him. My parents agreed to adopt him on the spot, to my brother’s relief and delight, because he had neither the means nor the time to care for this poor creature that was doomed to die from the beginning.

I thought about that for a moment: why would a dog be “marked,” so to speak, simply because of his breed? To me, it was comparable to racism or sexism or other “-isms” of which I was aware in my life. It seemed wrong to brand a dog from the beginning of his life based on the breed into which he was born, and though all of us hesitated towards Bubbies once we heard he was a pitbull mix, we quickly learned how fallacious those stereotypes could be.

I couldn’t help but soften in Bubbies’ presence. Though I was born into a dog-loving family and had never been without a dog for more than a week or two my entire life, I had never fallen so hard and so fast for a dog in all of my life. Bubbies was a typical puppy in the sense that he romped, he chewed on things he wasn’t supposed to and got into nearly everything within eyeshot (we affectionately titled him “goat dog”), but he had a spirit of kindness, of sweet and tender and generous love, and everyone who met him melted like putty in his presence.

He never barked or growled. He loved all sorts of people and other animals. He loved life.(He is still alive, though I am referring to him in the past tense for memory’s sake.) He wasn’t at all like the horrifying and nightmarish versions of pitbulls I had heard of, yet I began to understand the deep contention that some people still held against pitbulls, most of them not even due to personal experience.

I would walk Bubbies daily, and the reaction from passersby varied from intense fear to instant bond; the people who were afraid of him didn’t even know him. They would simply make a point to walk as far away from us as possible while muttering loudly and intentionally, “Should I get my gun? Is that dog going to bite me?” I would smile courteously, though I was fuming inside; my heart hurt, because Bubbies was the sweetest, most loving dog we had ever owned. “Sir, he is a good dog. You don’t have to judge him because of his breed,” I would respond. On the contrary, people who made an effort to stop and pet Bubbies would almost always chat with me like we were old friends. I learned quickly that most of them either owned or knew someone who owned a pitbull, and they all had very positive experiences. It was as if being a pitbull owner somehow set us apart from the rest of dog-owning society, and in a way, I suppose it did.

Shortly after my husband and I were married, we looked into adopting our own dog. After doing some research on local pet rescues, we found a meek little pitbull/Labrador mix nearby; 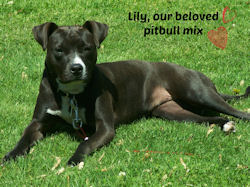 I knew Ben was a goner as soon as Lily licked his hand and nestled in his arms. From the time we brought Lily home to this day, she has been a loyal and loving dog who is truly a member of our family. We now have two small children – a toddler and an infant – and Lily tolerates everything about them, albeit with resignation at times. Though Ben and I are teaching our girls how to respect all animals and to pet them properly, Lily still endures the occasional ear-tug or swat on the tail when I am not looking. She has never snapped at the girls.

I find it sad that we live in a society that prides itself on “tolerance” when intolerance is so visible and apparent in every faction of our culture, including the world of pet ownership. Never in my life would I have imagined the intense reactions from people when they learned we owned a pitbull mix; I have heard the most insensitive, rude and unnecessary comments, such as “I thought pitbulls were only raised for fighting” or “The only people I’ve ever heard of who like pitbulls are the ones who live in the ghetto.” Ben and I try to politely-but-firmly correct them and hope that their experience with both Bubbies and Lily will change their minds and their hearts.

The truth is dogs are like people: they all have the potential to be mean and nasty or loving and affectionate, regardless of the breed into which they are born. While some are susceptible to aggression, if they are raised in a loving and nurturing home, they don’t have to become a sad statistic and end up euthanized or as a poster child for violent animals. If we would look at a puppy the way we (hopefully) see an innocent infant, perhaps our hearts would respond with acceptance and love, no matter what type of dog it happens to be. If we give pitbulls a chance, we can realize how much bigger our world can become, how much more love we can include in our lives, and how much we can learn from our dogs.

Before owning a pitbull, I was not familiar with dog discrimination; I didn’t realize it existed. Now I see how pitbulls symbolize those who are on the fringe of society, who are rejected, judged, maligned, scorned and ostracized. Both people and pitbulls should be loved based on the merit of their character, not because of what skin into which they were born. I am proud to own a pitbull and doubt I will ever love another breed with as much depth and vigor as I do these beautiful dogs.

Jeannie Ewing is a stay-at-home mom to Felicity, 3, Sarah, 8 months, and her "four-legged daughter," Lily, who is a pitbull/Labrador mix. Jeannie and her husband, Ben both grew up with myriad animals but have loved dogs above all other pets. Ben's dad is a retired veterinarian, and both families have adopted strays and mutts throughout the years. Jeannie blogs about parenting, faith and family and life in the Ewing household. They can also be reached on Facebook.