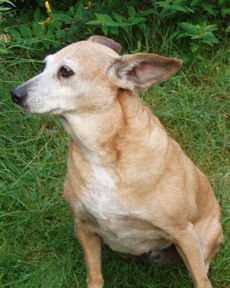 She first came to our attention after we had visited a local show at the village hall organized by a nearby refuge for abandoned dogs and cats.

At the ripe old age of eight Poppy, we were told, had been “rescued” from owners who had over time collected more than 30 dogs, many the result of interbreeding, and who understandably had found themselves no longer able to cope.

A little less easy to comprehend perhaps was how come these people had never heard of the possibility of spaying their animals and instead had kept an ever-increasing pack in the most miserable of conditions. When Poppy arrived at the rescue centre, she was undernourished, unhealthy and desperately in need of some TLC.

Over the next three months she was nurtured back to good health, neutered and vaccinated, but time and time again passed over by curious visitors as a likely pet because of her age and her less-than-generous helping in the looks department. Even by canine standards Poppy is no beauty.

Surrounded by larger and more aggressive dogs at the shelter, this mild-mannered dog, who apparently never barks, had even sustained a nip in the rump which had required a few stitches.

We’ve kept dogs for several years now, always buying puppies with pedigrees longer than your proverbial arm and pampering them as befits any of man’s best friend and perhaps oftentimes more than a little OTT.

Although harbouring some doubts, we both felt it was about time to return some of the affection and joy we’ve received over the years to a dog less likely to find a home – in other words one entering dog dotage.

After first contacting the shelter directly a couple of weeks ago, we had spent hours discussing the pros and cons of another dog – especially one whose past and character were still a little fuzzy to us.

We poured over the sites of all the nearby rescue centres, looking at one “I need a home” face after another, reading the profiles of dogs who had spent far too many years chained to a post, kicked, beaten, abused and neglected, or whose owners had died and there was nobody willing to take them on, or pedigree bitches thrown on to the scrap heap after years of factory breeding, or puppies that as adults had outgrown, outchewed and outeaten their initial cuteness, or simply those handed in because someone in the family had discovered after a couple of years that they suddenly had an allergy.

Each story seemed more chilling, more moving and certainly sadder than the last.

So with more than a little reticence, we made the one hour journey to Poppy’s shelter – just for a visit – and although we didn’t exactly “crack” for her on the spot, her plight certainly tugged at our animal-lovers instincts.

Still there was the unresolved issue of how she – or any other adult dog for that matter – would fit in with our “pack”. So we bid farewell and promised to return a week later with a couple of our hounds for the sniff ‘n tell session.

And return we did, taking Poppy and our two beasts for a spin in the car to see how they all travelled together, followed up by a romp in a nearby field. All seemed hunky dory, even if Poppy looked more than a little confused by our imploring requests to “come” “sit” “heel” and “lie” (she is French after all) but after half an hour of doing only what dogs can reasonably do in public, all three appeared to be happy with the natural order of things and we decided in the time honoured tradition to say, “We do.”

Poppy is now settling in to her new home, probably still completely confused as to what has happened and who the heck those two jibbering idiots are who insist on interrupting her sleep and barking gentle commands at her that she has never in her life heard before.

It’s early days yet, and it’ll doubtless take time for her adjust and to join in all the fun, but the early signs are encouraging.

Still we can’t help sparing a thought for the thousands of other dogs here in mainland France (and of course elsewhere), abandoned through no fault of their own. And apparently it’s especially a problem in Summer, as owners suddenly discover they have nobody with whom they can leave their pet during the holidays and instead decide to abandon them at motorway service stations.

Even worse is the fate of abandoned dogs in some of this country’s overseas departments, such as La Reunion, where they’re used as shark bait, as the person in charge of Poppy’s shelter reminded us after she had received a consignment of half a dozen dogs from the Indian Ocean island.

Yes I know there are probably more important things in the world, and I’m not advocating that animals be put above human beings. But as the supposedly superior species on this planet, we have an obligation to protect and treat our environment and all creatures accordingly and it’s a sad fact of life that we so often fail.

And I’m not looking for back-slapping praise nor do I intend to come across as all sanctimonious.

But if there’s anyone out there thinking about getting a dog – or any animal come to that – why not take a trip to the local pound and see what really requires a home. And listen to some of those heart-wrenching stories of exactly what we’re capable of doing while remembering if you have even the slightest doubt that – in the words of that campaigning slogan – “A dog (or a cat) is for life.”

Johnny Summerton is a Paris-based broadcaster, writer and journalist specialising in politics, sport and travel. For more on what’s making the headlines here in France, log on to his site at http://www.persiflagefrance.com or visit his personal site on http://urlswurld.blogspot.com