Heartworms (Dirofilaria immitis) are so-called because they mainly live in the right chamber of the heart. Dogs are commonly considered hosts of heartworms. Being a mosquito-borne disease, Heartworms can easily be transmitted from one susceptible dog to another via mosquito bites. Heartworm incidence has been recorded in all 50 states of the United States, with higher prevalence in places with higher elevations.

How is Heartworm Transmitted? 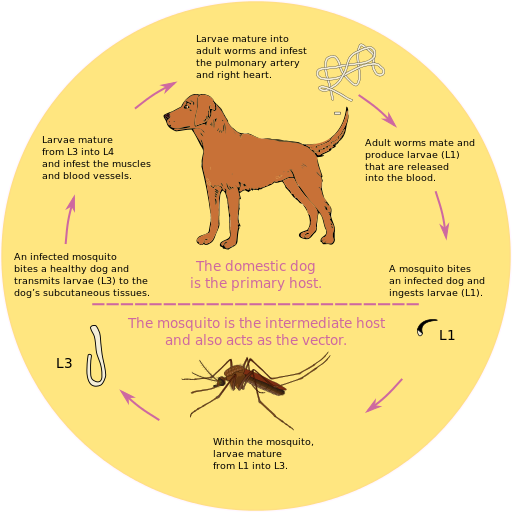 When a mosquito feeds on a dog harboring Heartworms, it sucks the larvae up with the blood. Inside the mosquito’s body, the heartworm larvae develop into the infective form. When the mosquito bites another dog, it is able to transmit these larvae as it feeds on the dog.

Inside the dog’s body, the larval heartworms slowly migrate throughout the dog’s body until they will arrive in the heart where they mature into adults. This period of growth and development occurs within a period of several months. Aside from the heart, adult heartworms also occupy the lungs and the major blood vessels associated with the heart and lungs. As mature heartworms mate, the offspring called microfilariae are released into the blood circulation.

Signs of Heartworm Infection in Dogs

There are no distinct symptoms which can be observed during the early phase of the infection. However, as the disease progresses, the dog will start to have a persistent dry cough. You can easily hear your dog coughing particularly during night time while it is resting. The dry cough is brought about by the fluid accumulating within the lungs, an enlarged heart that is pressing on the dog’s trachea or wind pipe, and bronchitis brought about the debris of dying worms which have become trapped within the lungs.

As your dog suffers from bouts of persistent dry coughing, you will also find your pet getting tired easily and has poor exercise tolerance. Without prompt diagnosis, serious complications may set in including enlargement of the liver, bouts of temporary loss of consciousness as a consequence of poor blood flow to the brain, and accumulation of fluid within the abdominal cavity. At this stage, the dog appears to have a pot-bellied appearance. The presence of an unusually large number of heartworm population within the major blood vessels of the heart and lungs cause mechanical obstruction, inflammation and eventually damage to the valves of the heart.

The obvious signs exhibited by dogs which are harboring Heartworms will depend on the worm population and the size of your pet. Mild cases which are attributed to a light worm infestation may not have distinct signs compared to moderate or severe cases of Heartworm infection.

When you bring in your dog for examination, your veterinarian will ask you about your pet’s complete history as well as clinical signs that you have observed. Several important diagnostic tests will also be recommended including a serological test, microfilarial detection, physical examination, x-rays, echocardiography and angiography.

The serological test is a diagnostic tool that will attempt to demonstrate the presence of antibodies and antigens present in the dog’s blood. Antigen tests are considered better tests for Heartworm compared to Antibody tests because it is able to detect specific antigens which are primarily found in adult female heartworms.

Microfilarial dection involves the identification of the offspring of Heartowrms from the dog’s blood sample. There are two tests which can be used for microfilarial detection: Knott’s Test and a filter test.
X-rays show a distinct picture of the heart and lungs of the dog. The results will help evaluate the severity of the infection as well as come up with a prognosis.

Echocardiography or ultrasonography helps evaluate whether there is enlargement of the chamber of the heart. The test can also help detect the presence of the Heartworms within the heart’s right ventricle or within the pulmonary artery.

There are many factors to consider before a treatment regimen for heartworms can be started. These factors include where heartworms are located, their number, whether circulating microfilariae is present, the dog’s age and condition, and whether or not medical complications are already present.

After careful assessment, your veterinarian will come up with a plan of action in order to get rid of the adult heartworms first. However, care should be taken because drugs which have been approved by the FDA are not without possible complications. Once the adult worms have been eliminated, treatment for microfilaria will follow.

Like most diseases, “an ounce of prevention is better than a pound of cure”. The best way to protect your dog against Heartworm infection is to give heartworm preventatives as recommended by your vet. Keeping your dog indoors during mosquito season and spraying your pet with bug repellant when it needs to go outside are also steps that can protect your dog against mosquito bites and possibly heartworm infections.