Popular Posts . . .
You are at:Home»Books»Pukka: The Pup After Merle

Earlier this year we wrote about Ted Kerasote’s book Merle’s Door, Lessons from a Freethinking Dog. When we received a copy of that book for review, we also received Pukka, The Pup After Merle, but never quite got around to reading it all. Why? Well, to be honest, mainly because it’s a story in photos and we just couldn’t seem to get hooked. 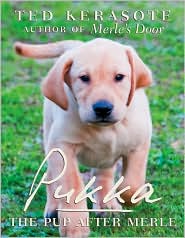 That’s not to say we didn’t totally enjoy the book once we devoted the proper time to study the photos and read the captions written from Pukka’s point of view. There are a LOT of photos, over 200 of them, and while some were kind of predictable (tiny baby puppies), many were not at all what you’d expect to find. In fact, we’re wondering if they might have any plans in the works to sell framed or canvas prints. If so, we’re particularly interested in the Seattle surf photos towards the end of the book.

Since the publication of the best-selling Merle’s Door, Ted Kerasote has received thousands of e-mails asking two questions: “Have you gotten another dog?” and “Are you writing a new book?” Pukka: The Pup After Merle answers both, in the most heartwarming way.

Told in the charming voice of Ted’s new pup and illustrated with more than two hundred photos, Pukka tells the story of how Ted met the young yellow lab, recounting the early days of their bonding as they explore Kelly, Wyoming, and the wider world. Filled with stunning images of the West, Pukka is a love story as well as Ted’s take on raising a puppy. It will do pictorially what Merle did with words—show how dogs thrive when treated as partners while illustrating the many ways that any dog can open the door to our hearts.

Even better, here’s how Ted Kerasote describes his book:

After Merle died in June 2004 it took several years before I could think about meeting another dog. I wanted to write Merle’s biography; I wanted my heart to heal; I was traveling on a book tour that lasted for over a year. In 2009 I met Pukka, the pup who won my heart after Merle. This is his story, told in his words and accompanied by about 200 photos that I and others took. Though it’s uniquely Pukka’s story, it also recounts how puppies grow and learn and become dogs.

And here’s a conversation with the author:

How long was it after Merle died before you felt ready to welcome a new dog into your life?
It took almost five years to get over Merle’s death and feel that my heart was at last open enough to embrace a new dog.

What drew you to Pukka?
I searched long and hard to find a dog that had some of Merle’s characteristics or, more generally, the characteristics I wanted in a dog when I met Merle: Someone who was very athletic; who could navigate deep snow; who could swim big rivers; who could camp out with me in any landscape. I also wanted a dog who, though active, could be laid-back in the house; who was affectionate; and who also had that certain reddish-golden tinge to his fur that reminds me of fall, of September light.

What does “Pukka” mean, and why did it seem like the right name for your new dog?
“Pukka” means first class or genuine in Hindi, and it seemed like a good name for the pup I met in Minnesota. He immediately took to traveling in the car; he knew how to use rest stops; he climbed the stairs in the motel with no problem and wasn’t afraid of children, swimming pools, and traffic. Plus he was a snuggler and affectionate.

How would you explain your philosophy of raising a puppy?
A lot of puppy-training manuals are all about confining the pup: to a crate so as to house-train it; to your own waist via a tether; to a playpen so it can’t get into mischief. But people have been raising puppies for about sixteen thousand years without these devices. Pukka had the run of the house and, yes, made a few mistakes about peeing and pooping. Did these turn into lifelong problems? Hardly. I picked him up midstream and said, “Outside.” He soon got it and has made no mistakes since he was a wee little fellow. I solved his teething problems by spraying furniture legs with a solution called bitter apple. Dogs don’t like the taste. He also had plenty of real bones to chew on. At the same time, pups, like children, need to learn manners—sitting, not bothering people, coming when called. But if these are made fun, and there’s some elk jerky and praise when it’s done right, the pup soon learns. My attitude is not to get too bent out of shape, and you and your puppy will be happier for it.

What have you and Pukka learned from each other?
I learned that one of the things I liked doing—running rivers—was not a great idea for a young, active pup. He wanted to be moving, to be roaming, and being confined to a raft was so borrrrrrrrrring! Pukka has learned from me that just because other dogs can do certain things—bark at the UPS man, for instance—that doesn’t mean he can. This has been a point of contention between us, he saying, “Why can’t I bark? All my friends are barking!” People who wring their hands over the company their children keep will understand this very well.