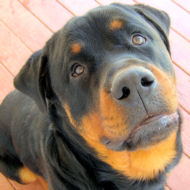 The Rottweiler is a breed whose history is somewhat shrouded. One theory has it that the ancestors of the breed were the dogs which were brought to Europe as War Dogs by the legions of Rome and some were left behind as the Legionnaires marched onwards. In any case, in the city of Rottweiler, a flourishing commercial and agricultural marketplace in southern Germany, for many centuries there was a breed of dog with the general appearance of the Rottweiler of today. This dog was used for its droving abilities and as a guardian against marauding animals and thieves. The animal was such an excellent protector against thieves that it has been noted in history that the moneybags for trade at the market were carried around the necks of these dogs.

The Rottweiler of today is noted for its high intelligence and trainability. In Germany, which requires strict control of the breeding population and is the home of the Ring Sport of Schutzhund, the Rottweiler is a superior competitor and often a strong contender for some of the highest titles. The dog has gained in popularity in the United States where it has continued to serve mankind in many areas, including a dog for military use, a guide dog for the blind, a police dog, a search dog and a family guardian and pet.

The Rottweiler should have a compact and muscular appearance. The head is square with a definite stop and bold look to the eye. The ears are folded over neatly and set high and are not overly long. The neck should be of solid proportion and strongly set on the shoulders, which should be well laid back for strength and pulling power. All in all, the entire appearance should be one of strength and solid power. The color of the Rottweiler is shiny black with rich tan markings above the eyes, on the cheeks and jaws and upper chest, a tan blaze mark should appear between the forelegs and on all four legs.

The character of the Rottweiler is willing, anxious to please and highly intelligent. He is also quite a happy dog, playful and with great spirit, never tiring of fun and games as long as it is with people that he loves. He is somewhat of a clown as a puppy and young dog, often not maturing and becoming “steady” until after the age of two. He will give great affection to people that he considers belong to him and will remain faithful and loyal. This is a dog that must be brought up as a social dog however, for he carries within his genetic history a fierce guarding and protective instinct and needs to learn early on that people are to be his charges and are not a threat. The Rottweiler has great strength and courage and a protective nature and when this is channeled in the right direction he will be the faithful guardian he is meant to be. However in the hands of an ignorant or irresponsible owner, this dog can do great damage because of those same instincts.