Looks like Tom over at Invention Home just might be my new best friend. He’s sent me yet another pet invention alert. And this one I not only have to mention, but would actually stand in line to buy the minute it hit the shelves.

I have two rather large outside dogs so we fill very big water bowls quite often. How cool it would be to hook my hose up to Tony Lytle’s invention – the doggie fountain – so that Roscoe and Roxanne could help themselves to water, fresh from the hose, whenever they liked? Pretty darn cool. 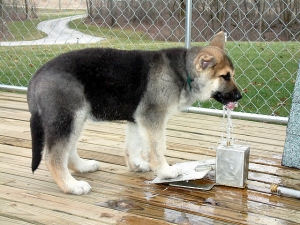 I’ve seen water-fountains for pets, but never one that doesn’t require a reservoir of water. It’s too bad there’s not a way to set up one of these indoors as well. Maybe if you know a plumber and have a lot of money you could have a custom-made pet fountain right in the laundry room?

I also wonder if Tony could invent a super-sized fountain for horses! Something that could be connected and initiated by the horse to disperse water through a hose and into the trough – but where the horse could sip the fresh water directly from the hose as it goes by. One of my horses loves to nibble at the water before it gets where it’s going.

I’d opt for testing out a stainless steel model in hopes that my dogs could use it without destroying it. Perhaps I could also think of some way to rig things so that they’d be unable to drag it around the yard and to “ground” it so that it wouldn’t freeze and could be used even during our mild winters.

I also have no doubt that my dogs would quickly learn that stepping on the pad meant water would spout up. It’s instant gratification for an action – so there would be very little training needed.

I really love this idea – of giving dogs the ability to get to totally fresh water at any time of the day or night. Even the best pet owners slip up every now with keeping water continuously at the ready and there’s nothing as fresh as a self-activated fountain for dogs.

Invention of the Week: Doggie Fountain

Got an Idea of Your Own?
If you have a great idea for a new pet product and would like help from square one, visit InventionHome to get the ball rolling. And if you’re an inventor with a finished product that’s ready to sell, try MatchProduct.com.