It is amazing how much dogs resemble us, and you realize that more when they sneeze. Because there is nothing more human-like than sneezing. But that can be said for a lot of different species since sneezing is not exclusive to dogs and it is very common among animals.

What I love most about dogs’ sneezing is that they don’t even care about spreading germs all over the place and they just let them rip. That is a relief that most of us don’t get to have since a lot of people tend to suppress their sneezes, which is not good for your health.

Most dog owners already know that their dog sneezes from time to time, and they don’t worry about that at all. But they tend to get concerned if their tail-wagger starts to sneeze frequently because they think there might be a problem.

I should say that, under normal conditions, it is totally normal for your pup to sneeze sometimes. So, there is nothing to worry about.

In this article, I will talk about all the reasons why dogs sneeze and mention if there are cases where you should be worried about it.

Why Do Dogs Sneeze?

Like humans, there are a lot of different reasons why dogs sneeze. It could be because he has allergies to something, such as dust or perfume. Dogs can also get allergies to all of sorts of cleaning products because of the chemicals in them. That is why you should be mindful of the products you’re using in your house and not spray them around your dog.

Other than the reasons I mentioned above; it can be the dirt left in your dog’s nose after the playtime in the park or after he spent time in nature.

That is especially true for hunting dogs since they get a lot of different things in their noses, such as broken twigs and leaves. That is why you should be careful if your dog tends to go around nose-deep through the undergrowth.

Also, sneezing can be a sign of an illness, which might need more serious care. Let’s look at all the different reasons your dog might be sneezing in detail and what you can do about them.

In addition to his sneezing, if your dog is always making noises that make him sound like he’s choking on something, he may have a case of kennel cough.

Kennel cough is a contagious respiratory disease that especially occurs in dogs that love to socialize and contact with other dogs outside, such as boarding schools, dog parks, training courses, etc.

Even though it sounds like a severe issue, it is not something to worry about in most cases. Because kennel cough is easily treatable in most dogs, but you should contact your vet immediately in case you suspect your pooch has such problem.

Like humans, dogs can sneeze because something in their nose is irritating them, or they might have allergies to something. In either case, something might create a tickling sensation and trigger sneezing.

This might be because of pollen, dust, smoke, or some other thing that he encounters outside. In any case, there is nothing to worry about unless your dog starts to sneeze too often.

Also, if you believe that sneezing is triggered by an allergy your dog has, you could get a hypoallergenic dog bed that could relieve his discomfort immensely.

If your dog tends to sneeze during playtime, you shouldn’t be worried because he might be doing that for a reason. As you may already know, dogs communicate with each other, whether with vocal signals or body language.

Dogs tend to send “calming signals” to each other when communicating and a Norwegian dog expert Turid Rugass thinks that sneezing might be one of them. This might be to calm the situation when they’re playing if things get a little too tense.

This brings the question of whether dogs can sneeze voluntarily and the answer to that question is yes, they can. There are even dogs that learned to sneeze on command to get a treat.

Nasal mites are another reason that might make dogs sneeze. Nasal mites are tiny arthropods that crawl in your dog’s nasal passages. The question of how they manage to do that is still unanswered, but the only thing that is known is that they can cause sneezing.

If you suspect that your dog has such an issue, you should contact your vet immediately. He will probably put a tiny camera in your dog’s nostril and look for the crawlies. If they are found in your dog’s nose, the usual treatment is administering antiparasitic drugs, such as ivermectin.

I already mentioned that some diseases might cause constant sneezing in dogs, and nasal infections are one of them. Dogs who have infection-causing bacteria, virus, or fungi in their noses, might suffer from a nasal infection.

Nasal infection is a very frustrating issue for your dog because it will make mucus build up in your pup’s nose, and it will be much harder for your pooch to breath. Also, it might cause non-stop sneezes.

In most cases, dogs can treat their nasal infection by themselves. But for severe cases, you should contact your vet if the issue doesn’t seem to be solved.

Although it is not that likely, dental issues can also be the reason for sneezing. Because your dog’s teeth are next to his nose and if his teeth get a disease, it can cause sneezing.

In rare cases, sneezing might be a sign of a more serious issue, which is nasal tumors. There are not a lot of possible causes of nasal tumors in dogs since they don’t smoke. But if you’re a smoker, there is a chance that he will get effected by secondhand smoking.

Should I Worry If My Dog Sneezes? 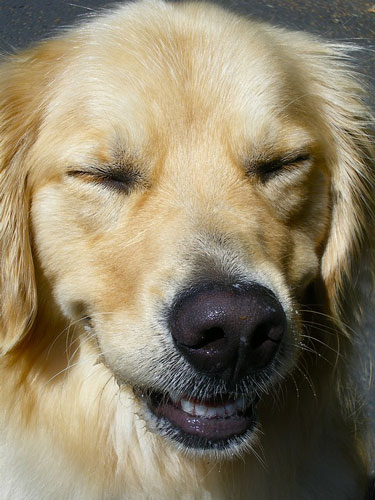 As I said before, sneezing is a very natural thing, and you have nothing to worry about most of the time. But there are cases where it might be an indication of a bigger problem. In the cases below, it might be a good idea to contact your vet immediately:

As I mentioned above, there might be a lot of reasons that are causing your pooch to sneeze, and it is probably a natural thing that he does, just like we do.

But in rare cases, it might be an indication of a more serious issue that needs to be taken care of. If you see any abnormal behavior from your dog, that might mean that you need to contact the vet immediately to avoid any issues.

Alaaddin Sarac has been an avid dog enthusiast since childhood. He started buypetsupplyonline.com in hopes of helping owners find answers to questions he had after owning his first dog.