Nat Geo’s had some really great shows on lately and the fun for animal lovers continues this Sunday (January 4th) from 8pm to 10pm ET. I’ve actually already previewed an advanced screening copy of In the Womb: Dogs. I haven’t yet watched the complimentary copy of In the Womb: Cats — but I have high expectations because the state-of-the-art visual effects and real-time 4-D ultrasound imagery used in the dog video was insanely awesome to watch and I expect I’ll be just as impressed by the cats video (in particular – seeing the lion fetus and birth).

Both kittens and puppies take just 63 days to go from embryo to adorable house pet – a transformation nothing short of remarkable. In just about nine weeks’ time, each newborn in effect recreates a micro version of the evolutionary cycle both species have undergone over millennia. National Geographic opens a window into the private world where traces of fearsome lions and wolves are still evident during the embryos’ transformation into cuddly kittens and puppies.

In the Womb: Dogs – Airs Sunday at 8pm 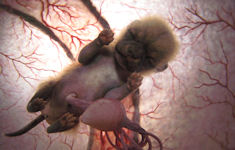 The program chronicles the fetal development of 1 wolf and 3 different dog breeds – mastiff, golden retriever and Chihuahua – including some of the first 4-D ultrasound images of a Chihuahua fetus.

The Chihuahua puppies are delivered via a c-section, which they show. So if you’re squeamish like me you’re forewarned. Following along the time line of fetal development is fascinating and this show is packed with facts. Did you know that the dog is the most diverse breed of animal in terms of appearance? Did you know that the idea of creating breeds and keeping them pure is only 300 to 400 years old?

In the Womb: Cats – Airs Sunday at 9pm 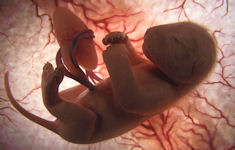 This episode follows the in utero journeys of a house cat and a lion, showing – for the first time ever on television – 4-D ultrasound images of a lion embryo and a cat embryo running in place and stretching in the womb.

I’m extremely eager to see the lion footage. I expect to learn mating habits of cats and lions and I expect to come away armed with a lot of knowledge about cat breeds. I know that there are fewer cat breeds and I don’t think that the domestic house cat is a direct descendant of lions (as dogs are of wolves). I am curious to know how in the world a mother lion manages to hunt during pregnancy. Hopefully they’ll cover that as well – though I imagine the female lion they follow will be living in a zoo. Surely they don’t take ultrasound equipment into Africa in hopes of finding a pregnant lion who’ll oblige that intrusion.

UPDATE: Wow, I guess NatGeo didn’t keep the videos live. That stinks, sorry!
We’ve removed the embedded clips from the episodes (golden retriever and cats, lions, and the testosterone effect) because they were just big blank black boxes as of November 2012. They don’t show the series channel anymore, and they don’t have the awesome Interactive Timeline of Baby Animal’s Development that was there.

They have the DVD on sale in their store: In the Womb: Cats and Dogs DVD.