The 2011 Atlantic hurricane season officially started on June 1 and will end on November 30. Hopefully we’ll be spared any horrific storms like Hurricane Katrina that hit the United States in 2005. Hurricane Katrina was the costliest natural disaster, as well as one of the five deadliest hurricanes in the history of the United States. The final death toll was at 1,836, but that doesn’t include the death toll of precious pets also lost in its wake.

Meet Hooper, a canine survivor of Hurricane Katrina that hit New Orleans with full force and Jane Paley, his real-life mom who has written the most heartwarming story from her canine victim’s point of view. 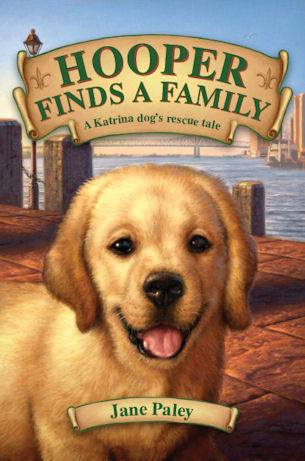 Hooper, a lovable and sometimes clumsy yellow lab, tells the story how he was so comfortable living with his Mamma and George, back when his name was Jimmy. He had his pattern of everyday living down pat and enjoyed the familiarity of the rituals. One morning it was raining when Mamma and George left the house.

It didn’t take long for the rain to turn to a torrential downpour and from that moment on you’re taken on the journey with Jimmy as he battles unbelievable obstacles to survive. He had a fear of water and didn’t know how to swim but it really wasn’t important since the water carried him.

Other animals talk to him along the way, some help him and some scare him to death. Jimmy describes how the flood waters carried him from one fearful place to another until he finally latches on to a roof where he can rest and watch the debris pass swiftly by.

You can feel his hunger, thirst, fear and loneliness. He tells you how the man on a door comes by and saves him by paddling with a broom to dry land. His new friend promises to take him someplace safe but instead of going home to Mamma and George, the man puts him in a cage in the back of a truck and takes him to an animal shelter with countless other dogs. Day after day he patiently waits for Mamma and George to come and get him.

Instead, a volunteer named Chrissie chooses him to find him a new home. They take a road trip together from Lake Charles to New York City where Jane and his new family are waiting. She explains to him how he will get a new name along with the new home.

From day one with his new family he knows that Jane really likes him, but Larry is another story. He tells you how he now has a human brother and how he acquires a passion for baseball. He deals with the frustration of them not knowing his “real” name but finally accepts Hooper as his new name. The once country dog is transformed into a city dog. After dealing with the first bath things begin to fall in place very nicely for Hooper.

Hooper Finds A Family is 23 chapters of total reading enjoyment for young readers, dog-lovers and anyone who wants to read a story about determination, courage and the will to survive.

Rescue shelters play such an important role in the lives of many unwanted and abandoned pets. The rescue organization Labs4rescue matched Hooper with the Paley family. There are countless rescue organizations for specific breeds. Our appreciation to all the shelters, organizations and people work hard to keep our furry friends safe and happy.