Right now in Mexico, thousands and thousands of dogs and cats roam the streets seeking food and shelter, most dealing with serious disease, starvation, heat exhaustion and eventually, death. In the past in San Felipe, if strays were caught they were electrocuted. Now, because of ZAPP, if caught strays are euthanized, it must be by sedation.

To further address the issue, ZAPP has officially opened a new facility in Mexico that has an open door policy. Officials that used to take strays straight to their death, now drop the animals at the ZAPP door where they receive treatment and more. 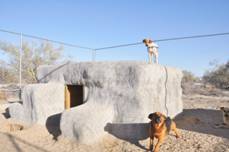 SAN FELIPE, BAJA, MEXICO – JULY 15, 2010 – ZAPP (Zero Additional Pup-ulation Project), an organization dedicated to saving the lives of homeless animals in Mexico, announces the official opening of the ZAPP Animal Care Center and Sanctuary. The new facility is the first of its kind in Mexico that has an open door policy for any and all dogs, cats, puppies and kittens, or any other animals that need care and safety because of injury or abandonment.

Very few people understand the severity and challenges faced for animals right across the Mexico border. Thousands and thousands of dogs and cats roam the deserts and streets seeking food and shelter, most dealing with serious disease, starvation, heat exhaustion and eventually, death. Mexican officials performs “roundups” at random times in an attempt to address the issue – throwing hundreds and thousands of stray dogs and cats into trucks and taking them to a place where they are killed. Not long ago in San Felipe, these strays were electrocuted, but because of ZAPP, San Felipe dogs are now euthanized by sedation. Hopeless, there was no way to overcome this atrocity, until now.

“The new ZAPP Animal Care Center serves as the central no-kill drop-off location for roundups by San Felipe and Mexicali officials,” said Steven Forman, founder and head dogman at ZAPP Animal Care Center and Sanctuary. “Instead of taking these dogs and cats to their death, they now take them to the ZAPP Animal Care Center where they are treated for any conditions, provided food, water and shelter, socialized and then hopefully adopted into loving families in the US; but because of the economy and the home foreclosure situation, sister shelters and rescues that once took our dogs are now full and unable to accommodate our needs. So, at least for now, these dogs and cats remain safe and secure in our no-kill sanctuary.”

ZAPP is a Mexican Civil Association with US non-profit status and donations keep the facility up and running. To effectively run the ZAPP Animal Care Center and Sanctuary, donations are needed for food, water, vet bills and facility maintenance. To donate, please visit www.sfzapp.com. Your donation will help save the lives of hundreds of animals that were rescued off the streets of Mexico and now need loving homes.

ABOUT ZAPP Animal Care Center:
The Center is a rehabilitation and adoption facility for puppies, kittens, and special needs animals. ZAPP’s mission is to remove all at-risk animals from jeopardy, and provide a safe, loving environment that improves their quality of life. In addition to being a shelter and rescue, ZAPP also runs a shoe store that raises funds on eBAY, and does lots of events, shows, terrific raffles, and has a monthly subscription program called “Financial Friends of ZAPP.”